Research by the Joseph Rowntree Foundation (JRF) identified three common beliefs held about poverty in the UK today. These permeate into our thoughts and those casual comments we make:

1.   We are post poverty – with many believing that poverty doesn’t exist in our country today. Frequently we refer back to images we have seen of poverty in other parts of the world, setting up an ‘us and them’ dichotomy.

2.   Poverty is self-made – when people acknowledge poverty in our country they believe that it is a result of people’s own making. If only they tried harder or worked more they would not be in poverty.

3.   The game is rigged – that there will always be poverty in the world and that nothing will ever change that.

When combined the effects of these beliefs mean that poverty often gets dismissed out of hand or is seen as inevitable and impossible change.

We need to tell a new story about poverty – framing it in a way so we can build public and political will to solve it. We need to frame our story and solutions in ways people will hear and respond to.

‘Framing’ means making deliberate choices about how we communicate – both in our formal outputs – reports, blog posts, tweets – but also in our everyday conversations. It is about understanding how people think and feel, and telling stories that have the potential to change hearts and minds.

JRF argue that we need to frame poverty as a problem that can be solved – and make it clear that benefits are part of the solution, not the problem itself.

They found that using the language of compassion and justice was a more effective way to connect with people’s emotions than language about equality and fairness. 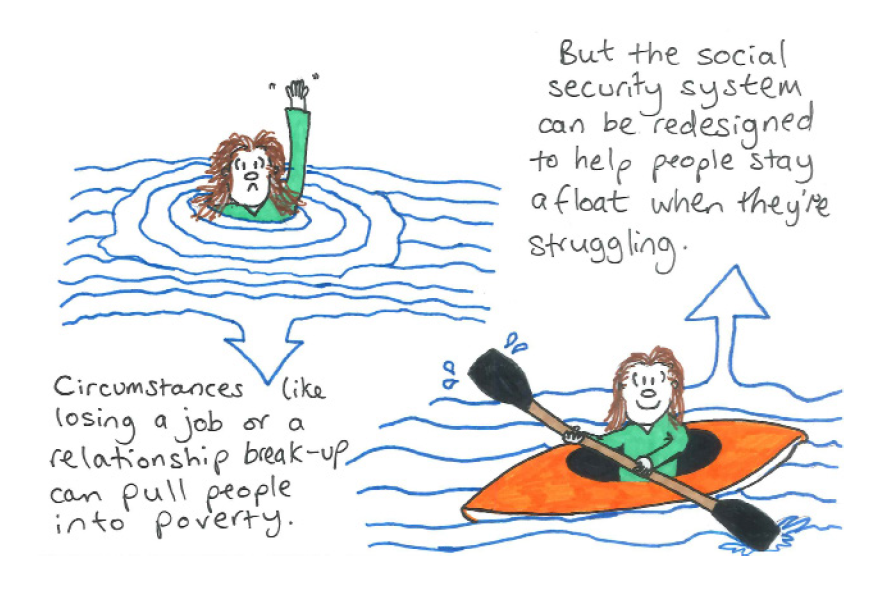 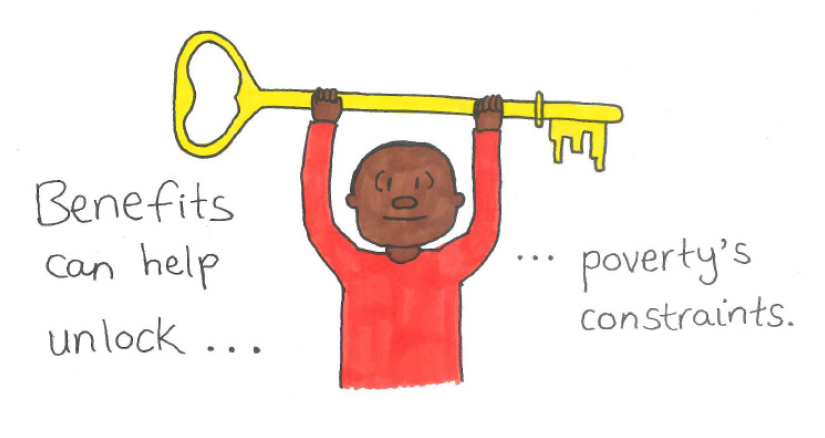 JRF’s research found that there are several simple, effective ‘swaps’ we can make when talking about poverty.

Two we can begin to use in our everyday conversations could be:

SWAP “Living in poverty” for “locked into poverty” – this conveys the image of poverty being an involuntary restraint that stops people from choosing their own path.

It’s going to take time, and practice to re-frame how we think and communicate about poverty.

We will all make mistakes along the way.

Let’s take an extra moment before we speak or write to choose our words and images with care, so together we can work towards solving poverty in the in UK. 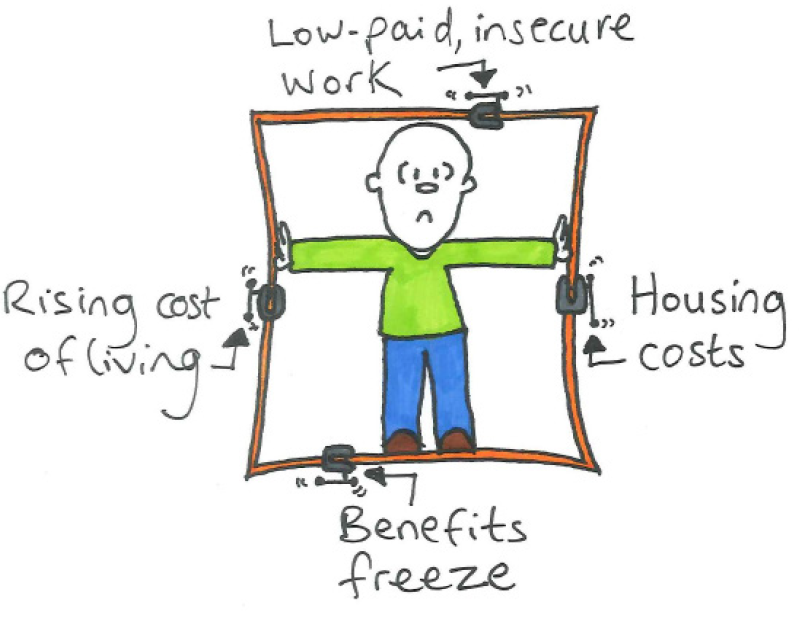 Want to find out more about framing? Joseph Rowntree Foundation’s framing toolkit is the perfect place to start.

All cartoons used in this blog belong to JRF / Frameworks and can be found in their Framing Toolkit.

We use cookies on our website to give you the most relevant experience by remembering your preferences and repeat visits. By clicking “Accept All”, you consent to the use of ALL the cookies. However, you may visit "Cookie Settings" to provide a controlled consent. Read More
Cookie SettingsAccept All
Manage consent

This website uses cookies to improve your experience while you navigate through the website. Out of these, the cookies that are categorized as necessary are stored on your browser as they are essential for the working of basic functionalities of the website. We also use third-party cookies that help us analyze and understand how you use this website. These cookies will be stored in your browser only with your consent. You also have the option to opt-out of these cookies. But opting out of some of these cookies may affect your browsing experience.
Necessary Always Enabled
Necessary cookies are absolutely essential for the website to function properly. These cookies ensure basic functionalities and security features of the website, anonymously.
Functional
Functional cookies help to perform certain functionalities like sharing the content of the website on social media platforms, collect feedbacks, and other third-party features.
Performance
Performance cookies are used to understand and analyze the key performance indexes of the website which helps in delivering a better user experience for the visitors.
Analytics
Analytical cookies are used to understand how visitors interact with the website. These cookies help provide information on metrics the number of visitors, bounce rate, traffic source, etc.
Advertisement
Advertisement cookies are used to provide visitors with relevant ads and marketing campaigns. These cookies track visitors across websites and collect information to provide customized ads.
Others
Other uncategorized cookies are those that are being analyzed and have not been classified into a category as yet.
SAVE & ACCEPT