On stage, alongside Paul and the speakers of the evening, were Claire and Gill from More Than Minutes, drawing visual minutes of the event’s important messages.

To mark the opening of the evening, we heard pledges of support from Archbishop Malcolm McMahon for the Archdiocese of Liverpool and Bishop Paul Bayes for the Liverpool Diocese. Paul Beasley said, “Liverpool is a city with a big heart, and no matter how hard things get, we always come together.”

Canon Tony O’Brien and Very Rev Dr Sue Jones explained how the cathedrals worked together to bring the pledge evening to life.

Melisa Campbell, consultant in Public Health to Liverpool City Council, and Co-chair of Liverpool’s Food Insecurity Task Force introduced the plan, why we need it and how the plan has been developed so far; “Food Insecurity has been increasing in Liverpool for the last 10 years. This isn’t something that’s happened as a result of the pandemic, but it has been exacerbated. What we’ve realised from this first phase of our work is that we probably don’t fully understand the extent of food insecurity in Liverpool. There’s much more work to do to recognise the full scale of what we need to address.”

Kevin said, “I’ve seen the power of community-based action to tackle some of the problems that we have. Food insecurity is systemic and we need to reconstruct that system. I believe we can create a city where everyone can eat good food.”

Our guest speaker was Emma Revie, CEO of The Trussell Trust who pledged to fund the role of a Development Worker within the Feeding Liverpool team. Emma, giving a national context to food insecurity, said, “I’m not joking that I’d love to be out of a job. In order to bring about an end to food banks, we need to see systemic change. We need our services to be well-coordinated and sufficiently resourced. It’s also so important that we engage with people with lived experience. This is a plan that is shaped by people with lived experience.”

Ian Byrne MP, co-founder of Fans Supporting Food Banks and the Right to Food Campaign, and MP for Liverpool West Derby, looking at the work happening locally to combat food insecurity, said, “I’m not going to stand here tonight and bring good tidings. We’ve got an estimated 32% of adults in this city experiencing food insecurity. Political decisions have life and death consequences. But there are glimmers of hope.”

Dr Naomi Maynard, our Good Food Plan Programme Director, called us all to continue to support the #RightToFood campaign and Trussell Trusts’ Hunger-Free Future campaign, for businesses to sign up to the Real Living Wage, and for people and organisations to join the #GoodFoodLiverpool movement by signing up to our mailing list.

The evening ended with public pledges from local and national organisations.

Andrew Forsey for Feeding Britain pledged £30,000 for the development of community food spaces across the city.

Together Liverpool pledged to support the good food plan as they grow their Network of Kindness across the city.

VS6 Partnership pledged to use their networks to disseminate the five goals across the city region and beyond.

We asked attendees and those watching online to pledge their support through our website or on pledge cards. 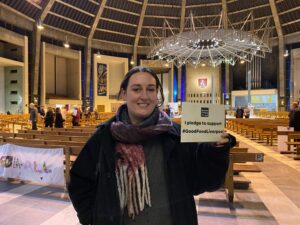 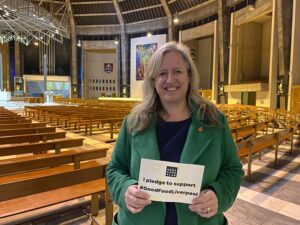 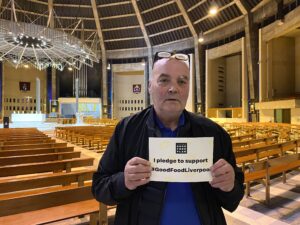 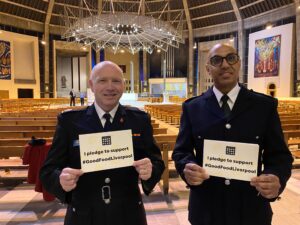 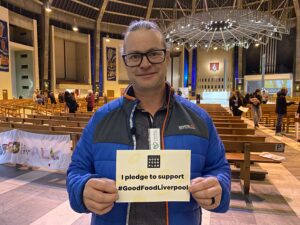 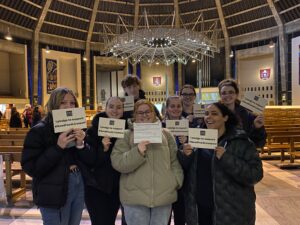 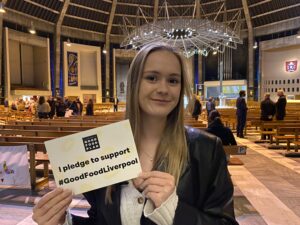 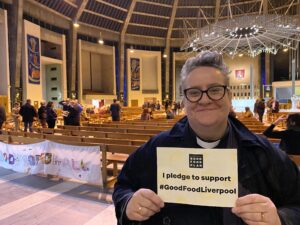 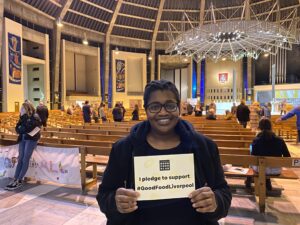 Thank you to everyone who has pledged so far. We have received over 40 pledges of support since the event.  You can read some of the pledges made by businesses and organisations, charities and community groups, and residents here. If you would like to make an online pledge, you can do so here.