Case Study:
The Power of Football in Ensuring Good Food for All

Football clubs and football fans in Liverpool have a long standing relationship with food banks and quickly responded to a sharp increase in food insecurity across the city during the Covid-19 pandemic with an increase in support.

“I never ever thought that the need for this sort of thing [food insecurity] in Liverpool is so great. It’s frightening how many families are just one boiler, one oven breaking or one flood away from not eating anything. The breadline is so close it’s unbelievable.There was one lady that reached out to us while she was sitting in the kitchen with towels around her and the oven on to keep warm.” – Adam​ Howard, Programme Manager, Everton in the Community. 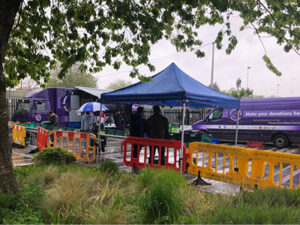 Football clubs and their official charities have played a remarkable role over the past 18 months to ensure that communities have access to ‘Good Food.’ They have done this through supporting the food banks with financial and practical support, as well as through direct engagement with their community to provide vital support and assistance.

Liverpool FC  is passionate and committed to supporting its local communities . Food poverty is sadly not a new concept for us, we have been working alongside North Liverpool Foodbank since 2017 to support local people in food crisis. We know that the pandemic continues to have a huge effect on many people’s lives, particularly financially, which will exacerbate food poverty further. This is why the support is needed now more than ever.”

The Power of Football in Numbers

Things like this transcend football. We got together on a Saturday afternoon with the idea of trying to raise £10,000 to fill the void, and to be here a little over 48 hours later with £10,000 of donations is the biggest testimony to this city. 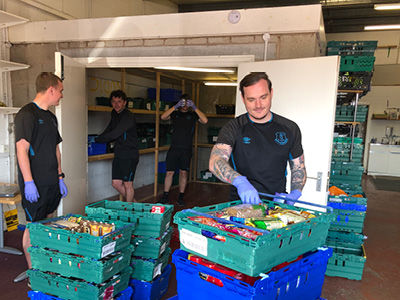 Throughout the pandemic, ‘Good Food’ moments have been created as a result of the clubs’ work – some of these moments are described below;

*All names have been changed to maintain confidentiality.

With the increased intensity and scale of work to support people experiencing food insecurity over the last 18 months, there is much learning that has been gained that will help inform work moving forward including;

A commitment to the Good Food for All vision

Both clubs are committed to the Good Food Plan vision of Good Food for All.

We would like to be part of The Good Food Plan moving forward as Liverpool Football Club is committed to helping those in food crisis in our city with a special focus on the Anfield area. Having worked on helping to tackle the food poverty crisis with local organisations since 2017, I personally would like to be more involved in conversations, campaigns, training and awareness around food insecurity.”